The Granbury Church of Christ has its roots in the Restoration Movement in the late 1800s. The Granbury church grew out of the Thorp Spring church and related Add-Ran College founded in the early 1870s.  J.H. Harbinson,  who ran a local livery stable, was preaching for a small church of about 30 to 40 who met at the courthouse. Addison and Randolph Clark, from the Add-Ran College, also preached on rotating Sundays.

The Early Church in Granbury

The church built a frame building on the southeast corner of Houston and Bluff Street in 1889. The early elders were Ed Aiken, Dr. E.A. Hannaford, and Dr. T.H. Dabney.

Divisions occurred over the use of instrumental music and the organization of missionary societies. Those congregations holding to the position of only a cappella music in worship and no supra-congregational organizations became known as “Church of Christ”. Those holding to the approach which permitted these practices became known as “Christian Churches” or “Disciples of Christ”.

Thus, around 1905, the church at Houston and Bluff separated after an organ was introduced for worship services. Those favoring the use of instrumental music remained in the frame building and become the First Christian Church of Granbury. The original church building was moved in 1992 to the corner of Bridge and Brazos Street and is now the Dora Lee Langdon Cultural and Education Center. The 1889 church building.  This photo is from the mid-1970s when the building was still in its original location.

The Granbury Church of Christ

After the split, those followers of a cappella worship, lead by Dr. T.H. Dabney, met under makeshift arrangements at the Dabney home, on the courthouse lawn, and at the Thorp Spring Church of Christ.

In 1911, arrangements were made to begin meeting in a church building on “stilts” at the corner of Pearl and Travis Street which had been used earlier by the Presbyterian church. The Church of Christ was allowed to meet in the building without cost through 1915. At that time, the congregation (then consisting of about 15 members), purchased the building and lot for $500 (approximately $13,000 in 2021 dollars). The first elders were Dr. T.H. Dabney, Mose Lewis and J.D. McElhaney.

In 1920 a storm blew down the building. Dr. Dabney expressed it as “a storm from the Lord” as it got them out of the old, small building. They built a stucco building on the same lot, using as much salvageable lumber as possible. A tabernacle was built in the 1920s to prove a comfortable place for the to meet in the warmer months. Possessing ceiling fans, a concrete floor and enclosed with wire, the tabernacle was considered one of the coolest places in Granbury on hot summer days.

As the congregation grew, the building was expanded several times in the 1940s and 1950s, including a 1952 addition of a new auditorium that could seat 350. 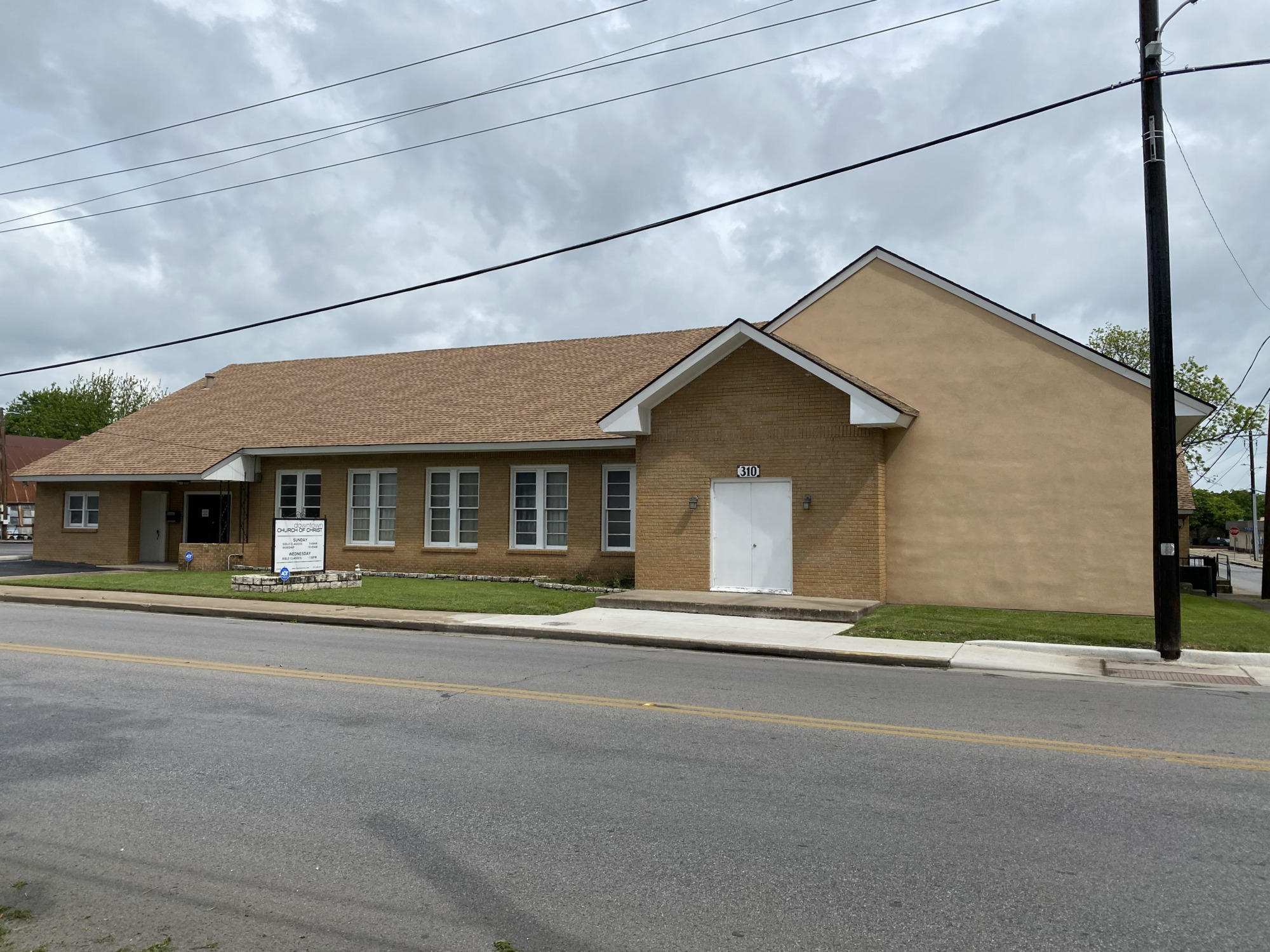 The downtown church as it appeared in 2020; now the Downtown Church of Christ. The original portions of the building are on the right side of the photo. The 1952 auditorium appears in the center of the building. From the 09/22/1960 edition of the Hood County News-Tablet – Dr. Dabney and his daughter Susan Cogdell shortly before his 100th birthday and about 2 months before his passing.

By the late 1960s / early 1970s, the church’s leaders realized that the church was becoming overcrowded with no additional room to expand. Due to the construction of Lake Granbury and the Comanche Peak nuclear plant, Granbury’s rapid growth was expected to continue. They made the bold decision to purchase 10+ acres at the west end of town, across from the then new high school, to construct an new church building with adequate room to expand as needed.

After almost 60 years downtown, the Granbury Church of Christ moved into the current building at 1905 W Pearl
Street on June 17, 1973. The colonial-style building’s auditorium is large enough to accommodate 750, over two times the size of the old downtown church.

Major expansions began in 1978 and occurred each decade thereafter to accommodate further growth of the church. By the 2010s, the church building was approximately twice the size of the original 1973 building. The church in 1985. This photo shows the 1973 auditorium and classrooms (at the front of the building) and the 1978 addition of the classrooms on the east and west sides of the auditorium. Preparing for the Future – Renovate ’23

After almost 50 years, the original portion of our church building is in need of major repairs and updates. The hallways, classrooms, bathrooms, and auditorium exits do not meet current building standards. The roof leaks, and several air conditioners are in immediate need of replacement.

Renovate ’23 is the vision for the future of the Granbury Church of Christ. With the Lord’s blessing, we plan to demolish and rebuild everything north of the Teen Center, except for the Auditorium itself. 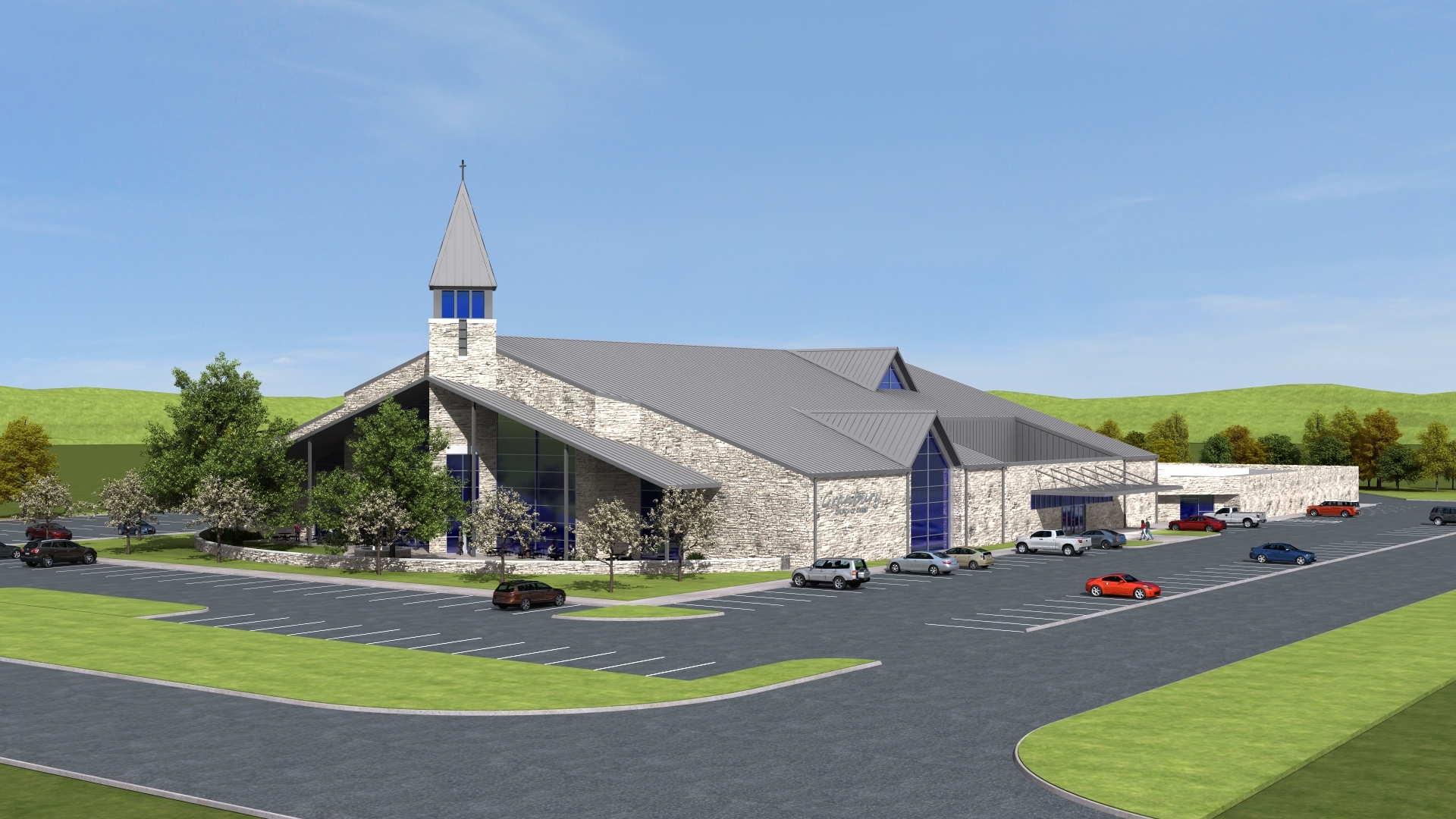 Artist rendering of the church after renovation. Entrances will be relocated to the east and west sides of the building. A new steeple will overlook garden space at the front of the building, incorporating existing oak trees planted in the 1970s. This rendering illustrates how the existing 1973 auditorium will be encased within the new structure. The 1973 and 1978 classrooms currently ringing the Auditorium will be removed to make way for the new building.

We’re in planning and prayer for this project and for the Lord’s will to be done for our church.  To learn the latest on Renovate ’23, click here.